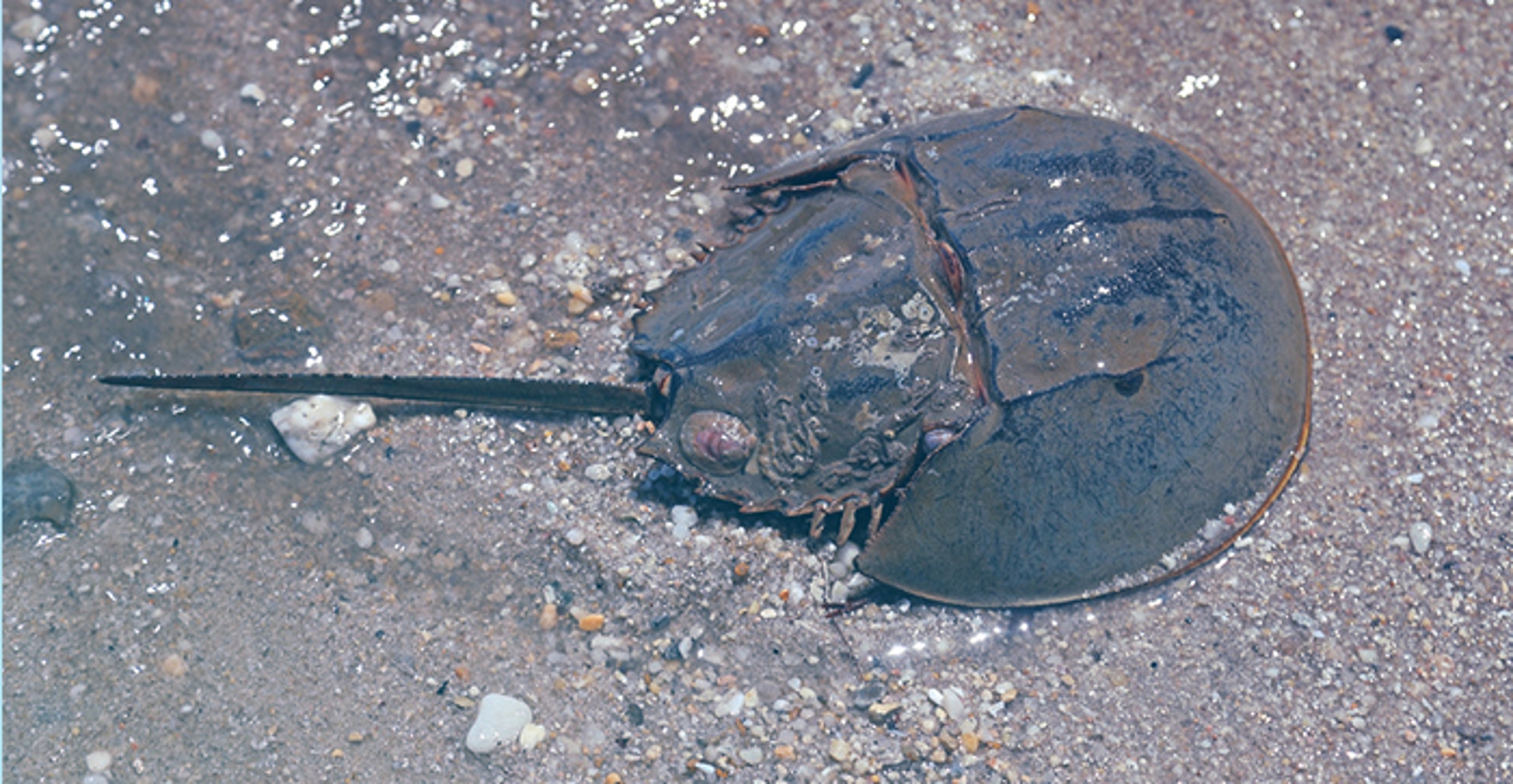 Horseshoe crabs are evolutionary survivors that have remained relatively unchanged in appearance for 350 million years. The horseshoe crab is not actually a true crab, but a member of an ancient group of arthropods, closely related to spiders and scorpions.
There are four species of horseshoe crabs around the world and only one in North  America. The species in North America is  the most abundant in the world and ranges on the Atlantic Coast from Maine to the Yucatan Peninsula.
The largest population of horseshoe crabs in the world is found in Delaware Bay. Horseshoe crabs arrive on the sandy beaches in mass to lay their eggs in May and June. Delaware Bay provides an excellent spawning area for crabs because the sandy beaches are protected from harsh wave action, and the beach’s sand and pebble mixture is perfect for incubating horseshoe crab eggs. Crabs arrive on the spawning beaches during the high tides of full and new moons when the water rises highest on the beach.
When the female is ready to lay her eggs, she crawls up to the high water line on the beach with a male attached to her. The male clasps onto the female’s shell with a modified pair of claws, and then she drags him around during the spawning process. In addition, to the attached male, several other males may also attempt to fertilize the female’s eggs by arranging themselves on and around the spawning couple on the beach during the egg-laying process. A female may have five or more males attempting to mate with her in a single egg laying episode.
During spawning, the female crab partially buries herself in the sand while she deposits a cluster of about 4,000 tiny green eggs. In an evening of egg laying, a female crab can lay several egg clusters, and she may spawn repeatedly over several nights to lay up to 100,000 eggs or more!
The eggs will hatch within two to four weeks. The larvae will emerge from the sandy beaches and enter the water during a high tide nearly a month later. The larvae look like miniature adult horseshoe crabs without tails. After hatching, horseshoe crabs spend their first few years of life on the tidal flats and move out farther from shore as they get older. Adults spend the winter in deep bay waters and off-shore areas. As spring approaches, the crabs move en masse toward the beaches to prepare for spawning. Since horseshoe crabs have a hard shell, they must molt to grow. Horseshoe crabs will molt at least six times in their first year of life and about 18 times before they reach sexual maturity. Females are generally larger than males and may molt more than males to reach the larger size. Once crabs are sexually mature, which takes at least nine years, they won’t shed their shells again. When the male crab completes his final molt, his first set of claws becomes modified into a boxer-glove shape that he uses to clasp onto a female for spawning. Adult crabs may live another eight to ten years, making the total lifespan of a horseshoe crab as long 20 years.
The horseshoe crab has a unique and primitive body structure. The body is composed of three parts: the prosoma (head), opisthosoma (central area) and telson (tail). The horseshoe crab’s name is derived from the prosoma, resembling the shape of a horse’s shoe. The telson helps the crab to flip itself over if waves on the beach turn it over. As dangerous as the telson may look, it is not venomous or used as a weapon by the crab. Horseshoe crabs have several pairs of eyes. Two large compound eyes on the prosoma are sensitive to polarized light and can magnify sunlight 10 times. A pair of simple eyes on the forward side of the prosoma can sense ultraviolet light from the moon. In addition, multiple eye spots are located under the prosoma, with more on the underside of the tail. Horseshoe crabs occasionally swim upside down.
Horseshoe crabs use book gills to get oxygen from the water. They are called book gills because the parts of the gill are in small flaps that resemble the pages of a book. If these primitive gills are kept moist, horseshoe crabs can remain out of water for up to four days. Crabs that get stranded on the beach during spawning will bury in the sand or fold themselves in half to conserve water
until the tide rises again.
Horseshoe crabs have no jaws or teeth. Instead, they have an impressive array of spiny mouth bristles at the base of five pairs of legs to maneuver food items such as razor clams, soft-shelled clams and marine worms into their centrally located mouth. To chew its food, the crab must simulate walking movements.
Check for high tides during full and new moons to see the spectacle of the horseshoe crabs spawning along the Delaware Bay.