Shedding New Light On Local Agriculture - One Painting At A Time 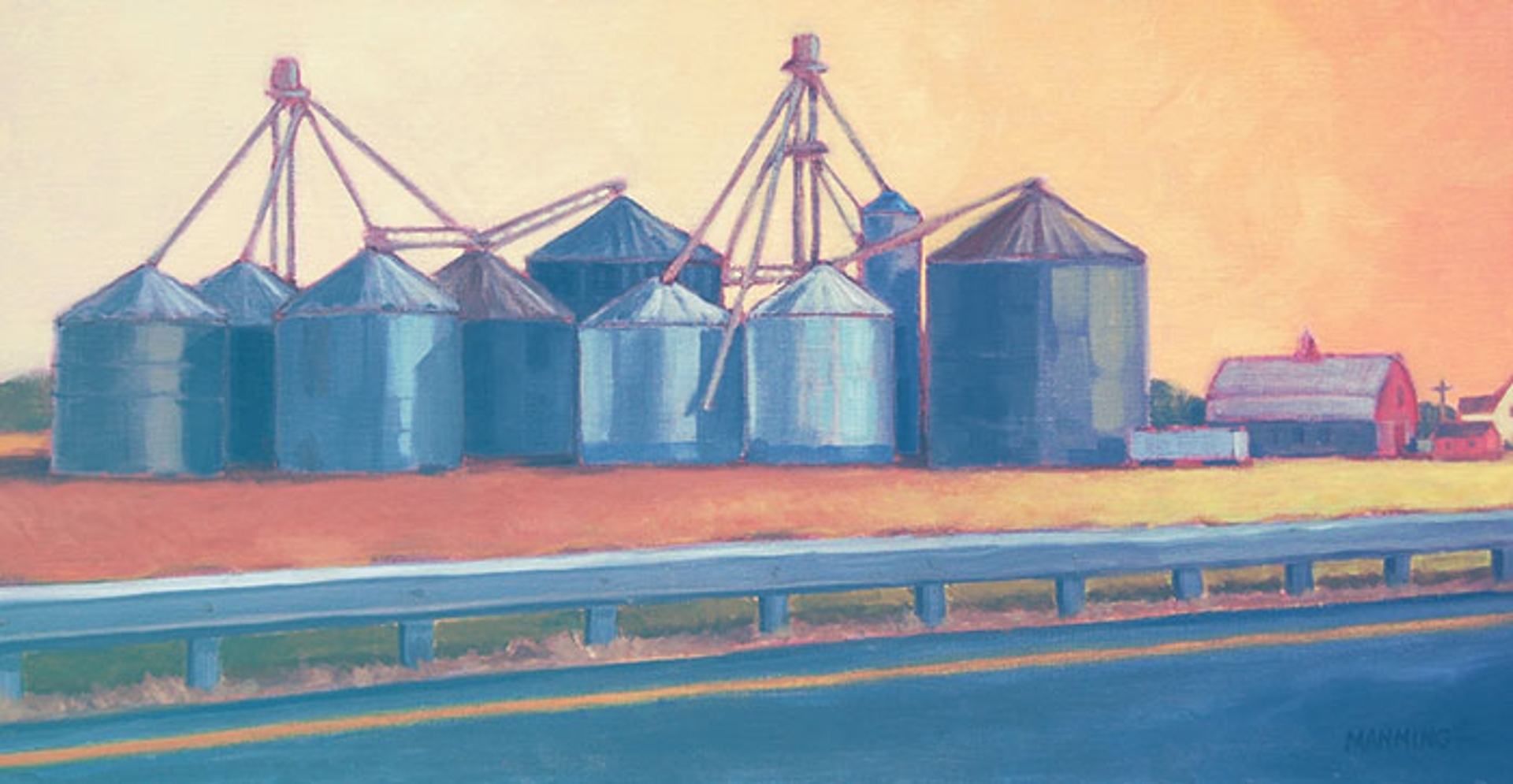 By Kathi Ferguson
Local artist Bob Manning’s love for the landscape was first inspired when he began sketching the riverfront views of Manhattan and Long Island City while living in New York during the 1960s. Among his favorite, albeit unusual, subjects were the power plants that could be seen towering above the horizon. “I was simply mesmerized by the sheer sizes and shapes of these things,” Bob says. “The smokestacks, the huge tanks, and the way the light hit them to create such interesting shadows.”
Making paintings of these complexes soon became the focus of Manning’s work. Ultimately however, Bob’s beloved urban cityscapes would be replaced by the pastoral farm scenes of the Eastern Shore.
After moving to the Shore in 2002, the artist’s eye was instantly drawn to the natural beauty of the agricultural landscape surrounding him. “Particularly alluring to me were the great collections of grain bins, barns, and farm equipment,” says Bob. “Their shapes reminded me of the power house complexes in New York – only now they were on farms!”
The scene for Manning’s first rural landscape was a chicken farm located in American Corner. Then came two family farms in Federalsburg, followed by numerous paintings of farms near his home in Preston. Showings of his work soon led to a number of commissions for “farm portraits” from farm owners or their families. “Many of these properties were being sold and beginning to disappear. My paintings were a way to keep them alive,” he explains.
A large part of Bob’s farm painting journey included frequent drives along Route 50 in Talbot County. “I could not believe the number of farms there were between Wye Mills and Trappe,” he says. “Little by little, I began to paint them while researching their history, discovering there was really quite a story here.”
While many of the farms on the Eastern Shore have changed hands over the years, some can trace their family name back generations. As Manning points out, “The historyof
Councell Farms in Cordova goes back to Dennis Councell, who arrived here from England in the late 1600s. The Gannon family has been living and farming in the area for five generations and still farm hundreds of acres along the Route 50 corridor.”
Storage bins rule in Manning’s painting entitled Colossus in Trappe. Known as Trappe Landing Grain in the early 1970s, owner Granville Wise sold the facility to Mountaire Arkansas/Delaware in 1976. One year later, operating as Mountaire Corporation, they began processing poultry. The facility would be sold to Wilmer and Joyce Hostetter in 1981 but repurchased by Mountaire from the Hostetters in 2007. According to Bob, the Trappe bins are currently used primarily to store feed for Mountaire’s poultry facilities. Their total capacity? A whopping 1.3 million bushels!
Mulberry Hill Farm signifies perhaps the biggest change Bob has witnessed during his time painting the rural landscape. Purchased by gentleman farmer Louis Plansoen in the early 1940s, this expansive farm occupied the property that is now home to various food chains, hospitality, and commercial establishments along Route 50 at Chapel Road in Easton. A handful of the barns remain and parcels of land continue to be harvested by local farmers.
“I feel fortunate to have been able to produce paintings of the many beautiful structures that made up Mulberry Hill,” says Bob. “What immediately stood out to me was the farm’s blue silo,” he recollects. “In fact many of the buildings and barns that made up the farm had blue roofs! The story is that the roofs ended up being used as directional reference points for people heading through town.”
Another memorable part of the Mulberry Farm property is seen in Manning’s oil painting of the Louis Plansoen manor. “I had the opportunity to paint the house before it was moved to Matthewstown Road in 2010, a short distance from its original site,” Bob says. “It is now a private residence. Interestingly, the new owners followed suit by keeping the home’s distinctive ‘Mulberry blue’ roof.”
Although the passing of time has added more rust to the bins, wear and tear on the tractors, and many of the standing barns are now used for storage, the Eastern Shore’s rural landscape reveals an integral part of its history and culture. And Bob Manning will forever be inspired to paint it.